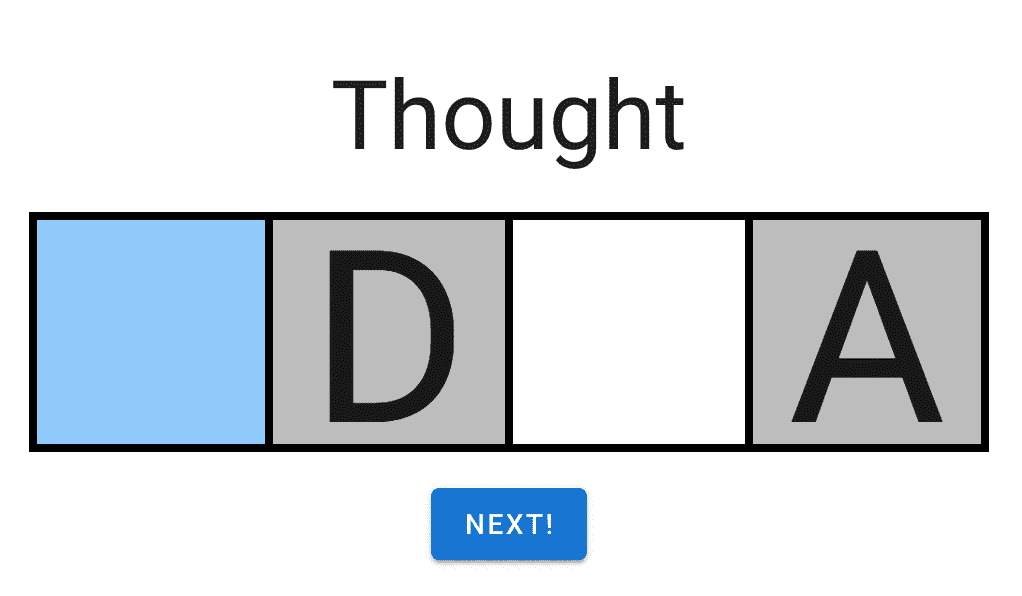 Welp, life got in the way this month. We found out pretty abruptly that our landlord is selling our apartment, so a housing search and lots of logistics took me out of the building mindset. That said, the realization that I wasn't going to have much to show for this month did spur me to create a fun little project, so... something about diamonds and pressure?

1. Get (minimally invasive!) ads onto whereshouldilive.co

I got enough views that it was pretty easy to get approved for Google AdSense, but in retrospect I'm not sure if it was worth it. Since it took a while to get approved, the little bump of viral traffic I had after launching had subsided by the time ads were running. Even so, I had 12,000 page views in the last thirty days and received a grand total of... $3.00 in ad revenue.

Part of the reason for the meager total is my refusal to cover the page with ads (I'm only using one banner ad in empty space at the top), but part is that showing ads has been getting less lucrative for years. Since I've continued to have reasonable success with Buy Me a Coffee, I think I'm going to get rid of ads going forward. Then I don't have to load Google's invasive ad code on my site either!

2. Get to 50 subscribers on this blog

Promotion tasks like this one end up being the first things I deprioritize when things get busy, so I can't say I tried my best here. But I did post about this blog twice as much as usual and ended up with 30% growth this month! That still only brings me to 30 subscribers, but this felt like a baby step towards getting better at promotion, so I'll give myself a passing grade.

3. Get 8 teams of strangers to attend the next free trivia game

Oof. This was the first month that no one showed up for the open game, which was partially due to me being busy and not promoting it, and partially due to bad luck. I think this month I'm going to combine the open game with the established monthly game I've been running for friends and family over the last couple years. That will help take some pressure off of me to promote the game and provide a more fun experience for anyone who does show up.

Between an unexpected housing search and fixing some miscellaneous bugs on whereshouldilive.co and Trivia Night, I made it to April 26th before realizing I hadn't done anything interesting this month. While I don't generally want to make work decisions based on what will be interesting to read about, I felt like a fun, easy project might be just what I needed.

I've been doing crosswords seriously for about five years, and have seen considerable improvement over that time, but it's all come through doing thousands of puzzles and slowly noticing patterns organically. Since my progress has stalled a bit, I thought it would be fun to build a tool for practicing.

While all puzzles have some unique entries that you need to figure out in the moment, there are a ton of common answers (known as "crosswordese") that you see again and again. From my analysis of historical NY Times puzzles, the same 200 words make up 7% of all answers, while the top 1000 totals 22%! If you can get those 1000 down pat, it gives you a huge advantage to figuring out the rest.

My tool uses historical clues to quiz you on these words, and keeps track of your stats to show your improvement over time. I've only been using it for a few days, but I've definitely made some progress already. 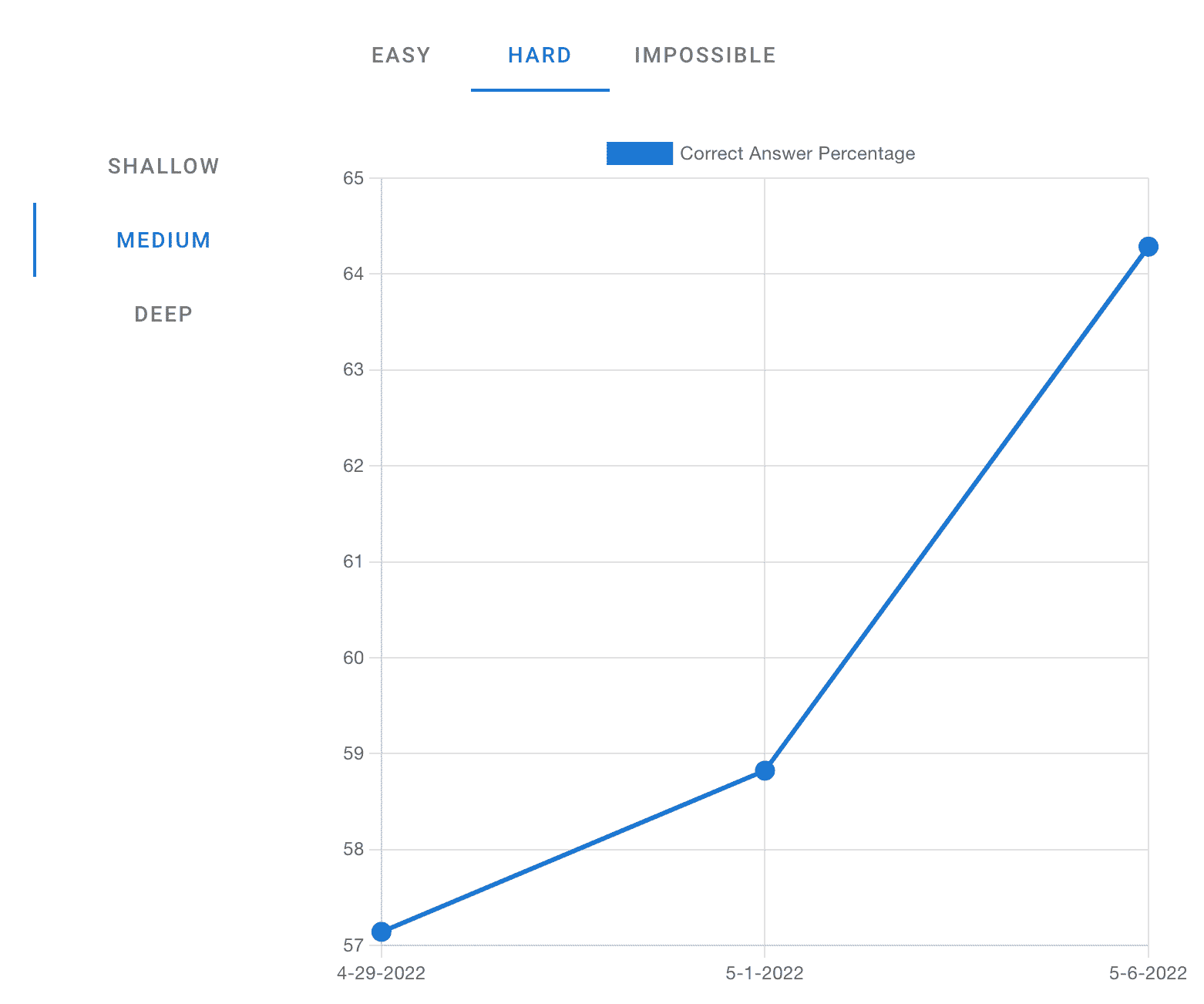 Check it out here!

It's now officially been six months since I started working for myself, so it seems like a good opportunity to check in on the experience so far!

In general, I'm heartened by how consistent and sustainable my productivity has been. While working for others, I would have long periods of motivation where I got a lot done (usually when I was either excited about the work, or had procrastinated enough that a deadline was looming) followed by long periods of lethargy and low productivity (when I wasn't excited about the work, or didn't have a clear goal).

I fully expected this pattern to hold while working for myself too, but it hasn't (so far, current housing situation notwithstanding) for two reasons:

The specifics of my daily schedule have been equally important. Back in November, I somewhat arbitrarily chose a goal of four hours of real work per day. In previous roles, I've found that after four hours of coding, my brain starts feeling pretty fried. While I can technically keep working, it takes extra effort to conceptualize anything remotely abstract, and I start making a lot more mistakes.

I wasn't sure if that number would hold up while working for myself, but so far it has. Days where I have to force myself to stop working after four hours are about as frequent as days where I need to push myself to keep working, which seems like a good sign. While I could decide to ride the natural waves of motivation, consistency has felt more sustainable to me so far. I'll check back in after a year!

1. Get some real work done on a bigger project

I've enjoyed building small sites the last two months, since it's fun to tell the story from conception to launch in a single blog post, but I think it's time to dive into something meatier for a little while. I've got two bigger projects in the very early stages, and will be focusing on those this month.

Since it's so early on, I don't have a concrete goal to strive for yet, but I'll be happy as long as I get enough done to write about it.

2. Add a suggestion box to danwaters.org

Not to contradict my previous goal immediately, but I don't always like working on a single long project for months at a time. My ideal situation is to have a large project to anchor my schedule, then slot in some small, fun projects when I need a break (e.g. whereshouldilive.co and Crossword Trainer). I've got a decent list of these built up from my own head, but I thought it would be fun to open it up to the public as well.

If you have an idea for a single-purpose tool, or something that would be fun to play with, or any other thing that you wish existed, you'll be able to submit it for consideration through the site. (If you already have an idea, feel free to send it my way now at dan@danwaters.org.)